Case Study Findings – What Good Are They?

Case Study Findings – What Good are They?

Case studies take a lot of effort! They involve a significant amount of fieldwork, draw on multiple points of data, and endure a thorough triangulation-style analysis. Researchers must be assured that the payoff for this effort will be worth it. The clearest signs of this can be found in the “research findings,” which is usually a written section of the report (or dissertation) that outlines the broader knowledge claims drawn from the data analysis. Findings are not simple “truths”; they are concluding arguments that are built upon the “results” of the data analysis. For qualitative research, analytic results are usually expressed in terms of themes or patterns; or a triangulation of those themes/patterns (which looks like a descriptive narrative). For quantitative research, results are usually expressed in tables with statistical values, or the graphs of those values, as well as short descriptive summaries about what those values represent. To assemble such results into concluding arguments, the researcher must have some type of strategy to “generalize,” taking a set of analytic particulars and synthesizing them into a broader claim. This module addresses the topic of “generalizing” in a case study to produce findings.

Historically, the case study has gotten a bad rap for its ability to generalize results. Yin, for instance, reflects that “the case study has long been (and continues to be) stereotyped as a weak sibling among social science methods” in large part because of its perceived inability to generalize (2002, xiii). Gary Thomas, likewise, notes that “despite case study’s popularity as a method, it persists with something of an aura of methodological second best” status, owing to the myth that it cannot generalize (2010, p. 575). Danish case study scholar Bent Flyvbjerg correctly discerns that, in spite of the end of positivist hegemony in Western science, the attitude persists that “social science is about generalizing” and that only quant-research strategies can generalize, to exclusion of case study (2006, p. 219).

This negativity with respect to the case study strategy in unwarranted for three major reasons (though there are plenty of subordinate reasons within each of rebuttal). First, not all case studies are in the business of trying to generalize and that is just fine. As Stake has pointed out, some case studies are pursued for their “intrinsic worth” only (Stake, 1994 – see below for details). Second, qualitative case study authorities did provide a generalizing strategy in the 1980s and 90s called “naturalistic generalization” or “transferability,” which, for philosophical reasons, avoids forcing a “one-size-fits-all” set of conclusions onto the readership (Donmoyer, 2000; Stake, 1994; Lincoln & Guba, 1986, 1985 – see below for details). Finally, a subset of case study experts have insisted that empirical generalization is not monopolized by statistical survey researchers, and should thus be taken up more as a “limited generalizing” strategy by qualitative case study practitioners (Gomm, Hammersley, & Foster, 2000[b]; Schofield, 2000; Hammersley, 1992). These authors find “no reason […] why case study research should not provide the basis for empirical generalization” (2000, p. 104).

Epistemology and the Ability to Generalize

Readers will notice below, in Table 3, a continuation of the epistemological discussion begun in Module 3, which considered four common stances for case study: post-positivism, critical realism, constructivism, and interpretivism. To reiterate from that module, one can find different versions of these epistemologies elsewhere based on authors’ philosophical preferences; for instance, Guba and Lincoln do not regard post-positivism and critical realism as separate stances, but rather, see the latter as the ontological foundations of the former (Guba & Lincoln, 1994, pp. 105-17). However, a handful of other accounts differ on this topic and compel a distinction here (Danermark et al., 2002; Sayer, 2000, pp. 155-88). 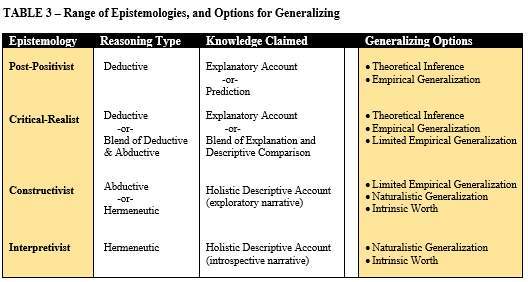 The post-positivist stance, which seeks to test hypothesis tied to theory and thus produce explanatory or predictive outcomes, is frequently seen in the political science case study (Gerring, 2007, 2004; George & Bennett, 2004; Eckstein, 2000) as well as the program evaluation case study of Robert Yin (2000, 1993, 1992, 1989, 1981[b]). Post-positivist case studies typically rely on quantitative or mixed methods and attempt to draw conclusions (“theoretical inferences”) about what is probable, relying on the theoretical conditions defined in the study. When case studies do offer empirical generalizations, they do so through the survey method, examining a distribution of features (or their co-occurrence or co-variation) in large populations based on statistical sampling (Gomm, Hammersley, & Foster, 2000[b], p. 103). In all post-positivist scenarios, the results are expected to carry an explanatory function at the general level. In other words, cases are expected to explain a given phenomenon – for instance, via a relationship between the study’s pre-identified variables – and do so in a way that speaks to the general occurrence of this phenomenon in the world when all conditions are equal (ceteris paribus).

A great many case studies, however, take a constructivist or interpretivist stance in epistemology, and thus treat “generalization” as an entirely different intellectual process that punctuates qualitative research in the social sciences (Stake, 2005, 1995, 1994; Donmoyer, 2000; Connolly, 1998; Merriam, 1998; Smith & Kleine, 1986; Lincoln & Guba, 1986, 1985). Qualitative case studies typically present one of the following strategies for generalizing the results:

Robert Stake explained that many case studies do not require generalizability on the scale of experimental or survey-based studies because they only attempt to capture the relevant findings for stakeholders, or perhaps the local constituents most affected by the research topic. For instance, a program evaluation case study might be conducted so that agency stakeholders can ascertain whether the program’s goals have been achieved, in which case, a holistic description of the program outcomes is all that is needed. There is no impetus to generalize to other cases (e.g., outside or unstudied cases) or broader population levels, as the “intrinsic worth” of the research has already been delivered in a single set of findings (Stake, 1994). Ethnographic case studies are explicitly carried out for intrinsic worth, as researchers recognize the inherent value of examining poorly understood cultures regardless of whether they demonstrate comparability with other (still unstudied) cultures, or offer applicable findings in this regard (Gomm, Hammersley, & Foster, 2000[b]; Hammersley, 1992).

When “intrinsic worth” is not the goal for a case study, Stake favors naturalistic generalization, because it encourages researchers to provide as much detail as possible in the final write-up of the report, and then leave it to readers to discern whether results can be transferred to their works. Executing this type of strategy means that each individual case profile – in fact, the entire case selection process – will have to be made highly transparent, such that outsiders can determine whether the results have bearing on their own projects. Lincoln and Guba hold a similar position called “transferability,” except that they highlight the ability of the researcher to contribute “working hypotheses” to their findings. These empirical hypotheses take the form of context-specific insights with direct case relevance and may or may not have transferability to outside studies (Donmoyer, 2000; Lincoln & Guba, 1986, 1985).

On the other hand, methodologists such as Roger Gomm, Martyn Hammersley, and Peter Foster (2000[b]) insist that leaders of qualitative research (notably Stake, Lincoln, and Guba) have ceded too much power to their post-positivist critics, retreating to an overly modest version of generalizability. They argue that there is a “limited empirical generalization” (LEG) that has been overlooked by Stake and his fellow qualitative researchers, and that it is a superior form of generalization in case study research. LEG basically involves the same epistemic logic used in survey-based case research, which samples statistically from a large population to identify within/across case variations, but then applies additional protocols to overcome its own lack of statistical sampling (2000[b], pp. 104-105). Gomm and company explain that the burden of LEG is to overcome the higher likelihood of error when no statistical sampling has been performed. They propose several trustworthiness protocols for this purpose (pp. 106-108; Schofield, 2000, pp. 69-97):

In-Depth Population Knowledge: Higher levels of heterogeneity in the target population risk diminishing the reliability of study findings in a way that cannot be precluded through purposive sampling methods, which use a small number of inclusion criteria and minimal screening and are heavily influenced by bias. Researchers are encouraged to supplement a rigorous sampling strategy with an intimate familiarity of the target population’s demographics, trends, beliefs, and so forth – which can be obtained (in some situations) from secondary literature and public/private databases. This added descriptiveness on the population will help reinforce the context and relevance of each case unit and its related themes or patterns.

Quota and/or stratified purposive sampling: In support of the above, researchers should plan to implement a well-conceived quota sampling or stratified sampling strategy that will tease apart some of the heterogeneity within the population and show a closer relationship between cases and subgroups (or the features within those groups).

Systematic case unit selection: Researchers should avoid selecting their case units based on convenience. Instead, they should scout those social situations that seem like potential candidates for the study, and identify their inclusion criteria (Schofield, 2000; Ragin, 1992). A detailed profile of the case units should already be underway by the time the study starts and should be completed by the time the research results are written for the final report.

Extended field observation: Whenever logistically possible, researchers should commit to longer case observation periods in the field, or at least strategically chosen periods, so that heterogeneity is not missed as a result of a brief data collection. 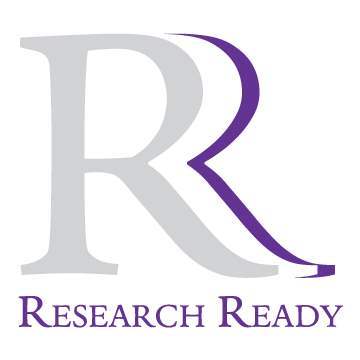