"My political curiosity, exclusive of my anxious solicitude for the public welfare, leads me to ask who authorized them (the framers of the Constitution) to speak the language of 'We, the People,' instead of 'We, the States'?" 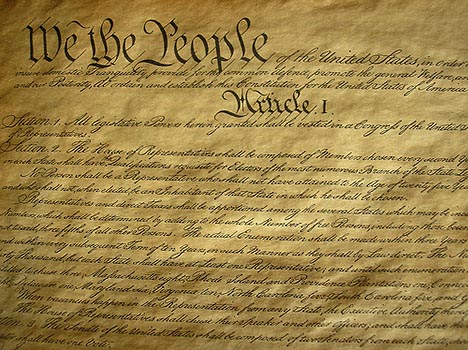 The Constitution also represents that summation of thousands of years of western thought, wherein the founding fathers took many of the best aspects of western thought and built them into the Constitution. Among those ideas were the ideas of separation of powers, that there would clearly be no monarch and instead the creation of an elected Executive, and perhaps most importantly the enshrinement of the idea that “We the People” should rule through a democratic process.

The Founding Fathers also recognized the failings of the Articles of Confederation, and created a system ultimately referred to as federalism - the separation of powers between the federal government and states, to better represent the interests of the people.

Citizenship Day neatly parallels Constitution Day and there are simple and direct reasons why both events are celebrated simultaneously. For instance, two rights of citizenship, voting and the right to serve on a jury, directly connect to the idea that the people should rule.

GCU celebrates this outstanding achievement of not just American history but the history of human civilization – an accomplishment that still influences our lives today. To celebrate, GCU conducts campus wide activities concerning the Constitution in the classroom and without.

Please celebrate with us and feel free to enjoy the following links concerning the Constitution: