This module provides an overview of research methods for phenomenological studies and describes means of data collection.

The methodology used in phenomenology differs than most other research methodology because the goal is to describe a lived experience, rather than to explain or quantify it in any way.  Phenomenology is solely concerned with the study of the experience from the perspective of the participants, therefore, the methodology does not include a hypothesis or any preconceived ideas about the data collected.

Phenomenology makes use of a variety of methods including interviews, conversations, participant observation, action research, focus meetings, analysis of diaries and other personal texts.  In general, the methodology is designed to be less structured and more open-ended to encourage the participant to share details regarding their experience. Surveys and questionnaires that are commonly used in other research methods to gather information from participants would be too structured and would not allow the participant to freely share.  In other words, phenomenology emphasizes subjectivity. The goal of phenomenological research methods is to maximize the depth of the information collected and therefore, less structured interviews are most effective.

Following is a list of principles and qualities applied to phenomenological methodology and data collection:

Several researchers have described variations of the for the steps used in phenomenology. The following diagram provides an example of a more detailed description of the steps in a phenomenology study.  It summarizes steps in the Modified Stevick-Colaizzi-Keen method as described by Moustakas (1994): 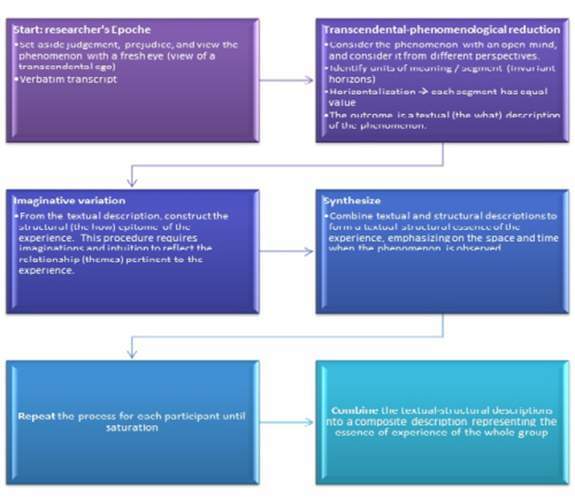 The video below, Tips for Conducting an Effective Phenomenological Research Study, offers additional information regarding how to effectively use interviewing as a means of data collection for phenomenological study.  Data analysis will be the focus of the next module in this series.

Introduction to Phenomenological Research – This PDF provides a comprehensive overview of phenomenology research.